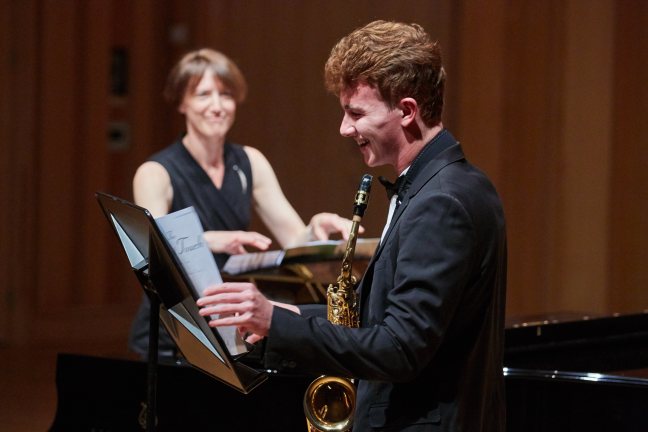 The end of the year may be coming upon us at Millfield, but the Music School has showed no signs of relaxing just yet, with another packed recital on Monday night’s Open Musicians’ Platform. On a night characterised by inclusivity and variety, 16 instrumentalists and vocalists took to the stage to bring the work they have done in their lessons to life in live performance.

Many of our performers made their debuts on instruments they had never performed on in a solo recital. Isabelle, more commonly at the violin, played the piano with poise and control, whilst Liberty and Ellie sang beautifully for the first time as soloists. There were also a number of new string players; Eloise gave a powerful performance of the first movement of Rieding’s G Major Violin Concerto, Harry made his inaugural performance on the viola, an instrument he only started learning a few months ago, and Abby played a selection of Bach minuets with real style.

As with many of the Music School’s recitals, the quality of the school’s vocalists really shone through. Phoebe sang with real heart and technique, Esme gave a mature performance of a beautiful folk song by Roger Quilter, whilst Bethan showed her diverse styles by singing a jazzier number with impressive control.

It was fantastic to see a number of brilliant woodwind players take to the stage. Matthew gave a punchy performance of ‘Bright Young Things’, Jevon showcased his impressive tone and colour, whilst Emily gave an energetic performance of Stanford’s ‘Intermezzo No. 2’.

The programme was topped and tailed by some fabulous performances at the piano. Cecily opened the programme with a beautiful performance of a work by Max Reger. At the end of the programme, Patience showed great musicality in her performance, whilst Steven’s rendition of Chopin’s ‘Waltz in E Minor’ showed sensitivity and expression, bringing the concert to a close in terrific fashion.

It was brilliant to see such a magnificent programme, full of interesting music played with energy and confidence. We can all look forward to more of the same in the upcoming Tea and Music, taking place in the Johnson Hall Foyer at 4.15pm on Thursday 14tth June.

The Millfield Music School Blog provides a fantastic insight into the musical life of Millfield School – from upcoming performances to concert reviews, insights into the music performed and details of the International Concert Series, keep up to date with everything throughout the year at: www.millfieldmusic.com