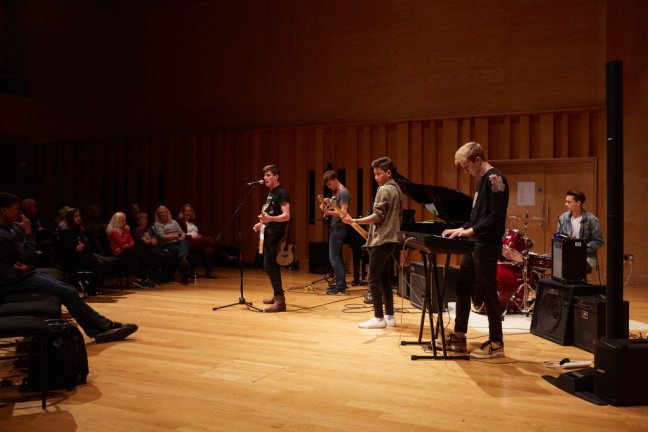 To continue our diverse and varied music programme, on Saturday night Millfield Music Department hosted the first Johnson Sessions gig of the year. This laid-back concert gave many students the opportunity to perform both acoustic covers and original songs, with many new faces taking to the stage for the first time.

The concert opened with a bang from The Croziers, a student band which has evolved over the last couple of years at Millfield. They performed Fortunate Son by Creedence Clearwater Revival, and got the crowd ready for yet another fantastic showcase of contemporary talent.

Following The Croziers, we heard two beautiful original songs from regular Johnson Sessions performers Laura and Rosie, both Upper Sixth pupils who have been recently excelling with songwriting. The audience appreciation was clear, with cheering and applause filling the Johnson Hall.

As the evening progressed we saw more familiar faces such as Oska and Jobim, who as usual wowed the audience and took their performances in their stride, but we also saw a good number of new faces. One such new performer was Laila who gave a compelling rendition of The Jackson 5’s I Want You Back. Difficult with such a famous song, Laila gave a wholly confident and fun version of the classic hit.

With too many outstanding performers to individually mention, the whole evening was undisputedly a huge success, with many people commenting that they could have happily watched for several more hours. With the ever-growing genre of contemporary music at Millfield, watch this space to see what the next Johnson Sessions will bring!

The Millfield Music School Blog provides a fantastic insight into the musical life of Millfield School – from upcoming performances to concert reviews, insights into the music performed and details of the International Concert Series, keep up to date with everything throughout the year at: www.millfieldmusic.com